If we don’t get our shit together…

On the phone with a prospective coaching client recently, I could tell the CEO in front of me wanted to “get it all out”.

It was clear a lot was weighing on him and that he had not had a trusted ear in some time for the team complexities he had been carrying:

My VP of Marketing is mad at my VP of Sales. My VP of Product thinks we should fire both of them. My VP of Engineering regrets that we ever hired a VP of Product. In short, the whole things feels like a mess. And we are going to run out of cash in 12 months if we don’t get our shit together.

I wish I could say his confession regarding his team dynamic was the exception.

Unfortunately, it is the norm.

The wear of time

Another client I have worked with for years built a very close, high-function early team. That team of 20 people stuck together through many of the ups and downs of navigating product-market fit. They were close friends. The company had a delightful culture. However, even for this tightly-knit group, the challenges came.

But it quickly became clear a critical piece was missing.

We were signing up world-class leaders. Each individual was a domain expert in her or his respective role. But as the CEO and I unpacked the emerging team dynamic, two things became clear:

What is needed for scale

For a company to effectively navigate the perils of shifting from product-market-fit to scale, and later to innovate its way through stalls in growth, the leadership team must work as a team.

The product organization will fail to capture opportunities in the market if they are not hearing from sales and marketing what is being learned from prospective customers.

Engineering will fail to effectively weigh tradeoffs in tech debt if they do not have a grounded picture of the financial realities of the business.

To work as a team, a leadership team requires:

An invitation to be a team

I often suggest to clients they invite their leadership teams to hang their ‘domain’ hats at the door. What I mean by that is when we enter into the leadership meeting (or the quarterly planning meeting, etc.) we are here as an entrepreneurial team not as separate department heads.

We are here to build the business together.

We are not here like some funky startup congress each representing our own contingencies.

Check your lanes and your egos at the door.

Clarity on what their team (vs. domain) accountabilities are

I am a big fan of writing down accountabilities.

As an example, a VP of Sales might have an accountability of hiring and training sales reps.

As a member of the leadership team, she may have an accountability of developing the company’s culture.

She is both the VP of Sales and a member of the leadership team.

Trust of one another

Many of the CEOs I meet call their executive or leadership team a “team” but do not treat it as a team.

One way I like to explore this in a session is to ask the CEO to identify the best team that she or he has ever been a part of. Often, this will be a sports team, an academic team, or a team from a previous work experience.

I might ask the CEO to name the characteristics of this team. What made the team great?

Next, I will ask that she grade her current team against each of these characteristics. Some interesting insights tend to emerge.

One element that often jumps to the forefront is trust. To operate as a team, these individuals must trust one another.

To negate seemingly squishy elements of team-building such as emotional closeness, effective conflict-resolution, knowledge of one another’s backgrounds, etc., is to negate trust and short-circuit efficacy.

An education on company building

Many good leaders have the potential to be great. Often, what is missing, is an understanding of how to build a company.

We can change that by coaching the leaders on a fuller understanding of how to build a business; we can invite them in.

Part of inviting leaders in is providing context.

In my early years as a CEO, I thought I had to keep many details of the business close to my chest. I was reticent to give the team, or even the leadership team, access to financials, board decks, etc. As a result, I created a sense of aloneness in my role that caused me a lot of pain. I also left my leaders unable to really be the partners I desired.

The potential at hand

It is heartbreaking to me how many founders and CEOs feel deeply alone in their roles.

There is an opportunity for every CEO to move from aloneness to connection and partnership.

If you have a leadership team, and if that team is not yet working together as a high-trust, high-efficacy group, there is an opportunity at hand.

If you would like some assistance exploring how to go from here to there, please feel free to reach out!

Wishing you connection and ease.

This is a good year to remember that the top-level metrics of your company are not the measure of your worth as a leader. 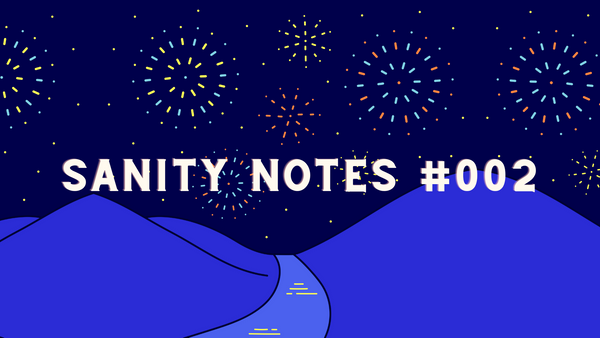 How might you be free to lead and create if your own sense of self was not on the line?

Welcome to Sanity Notes (SN). SN is my new semi-weekly newsletter exploring the hardest parts of entrepreneurship and leadership.